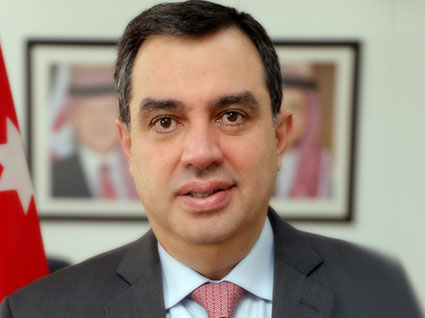 Posted at 22:24h in interview by Admin 0 Comments
0 Likes

Q: You coordinate many areas of this country; this Ministry has to make sure that the country is ready to compete on an international scale. What are the biggest achievements lately, and the biggest challenges?

INF: Jordan is always confidently looking at the future; it’s a country that, in spite of the problems of the region, has always been a safe haven and an oasis of stability. We have been a truly resilient nation, in every meaning of the word, and also a nation that has always turned challenge into opportunity. I think this is what distinguishes Jordan and makes it very unique.

When we look at what we are doing, we are a country that has a forward-looking plan: the 2025 Vision, which is our socioeconomic blueprint of where we want to take the nation over the next 10 years. It’s a nation that always does things in a consultative and inclusive manner, a country that continues its political, economic, social and administrative reforms, to keep the country competitive. Wave after wave; this keeps the country competitive, stable, resilient, and it keeps the citizens participating in planning the future of the nation.

Inside of our 2025 vision, we are very much focused on a twin goal of increasing prosperity while keeping, and strengthening our resilience. We are realistic; we deal with a region that will continue to have some of these conflictive situations.

We put the citizen at the heart of all our development. Empowering the youth and women is a top priority for us, to continue on this path. We have identified economic clusters, which are our economic growth engine: educational and health services, tourism and hospitality, mining industries, engineering, consulting services, the whole technology area, financial services and logistics. These are the areas in which we believe Jordan has a competitive edge, especially together, and we need to continue improving this competitiveness, and push the economy into a more aggressive export-oriented path, taking advantage of the unique FTAs that we have.

On the challenge side, what makes Jordan unique in terms of its resilience and ability to turn challenge into opportunity is this very strong idea of hospitality. Hospitality towards tourism, but also the way our citizens welcome people fleeing from war, refugees. As challenges we’ve had the civil war in Syria and the conflicts in Iraq, which closed borders and created loss in the export market. We compensate for this by trying to open new markets: Jordan is looking at East Africa and Africa, as well as the new rules of origin with the EU. When a door closes, we work to open a new one, to keep Jordan in a good position.

Nobody can deny that the burden of the refugees has been tremendous. It represented a 14% increase in our population, 1.3 million Syrian refugees only. We are dealing with a 20% increase in water demand (40% if you take only the north and center of the country) and we’ve had a downturn in growth because of all the violence of the region, but the drop in tourism plateaued, we are starting to see now a potential to reverse it. Surely people worry when they see what is happening in the region but, when they see that the country remains stable and that we are taking care of the refugees in a better way than most of the countries in the world do (even wealthier countries), there is a great appreciation of how Jordan conducts itself.

We are a bridge, a gateway, a platform to the region, a safe haven. This culture is very important to everything we do, and it’s very much related, also, to how we position Jordan as a business destination. The politics, the psychology, the heritage and the value system of Jordan are very much positioned in a similar manner, and this is very unique.

Obviously, there are tremendous business opportunities in Jordan. We are looking at delivering more and more infrastructure by using public-private partnerships (PPPs). In the past 10 years Jordan has made over 10 billion dollars on PPPs in transport, ports, water, power plants, renewable energy projects, etc. The challenge of losing the gas supply from Egypt, and the discontinuation of pumping (because Egypt doesn’t have enough quantities to supply other countries) have made us plan an accelerated path to diversify our energy sources and work in renewable energy. In less than 3 years, Jordan has a portfolio of 3 billion dollars in renewable energy projects that have been signed and are being implemented. We are on our way to achieve 10% of renewable energy by 2020 and maybe 15-20% of electric power. This gives you a clear example of how Jordan turns a challenge into an opportunity, and it has delivered, very much, through private investment.

As for the refugee situation, we also developed a Jordan response plan, a 3-year plan that we built as a model with donors and UN agencies, based on a comprehensive vulnerability assessment to the refugees inside and outside the camps (90% of the Syrians are actually outside the camps), and also based on the needs of the government and the treasury to continue providing public services to the refugees. 90% of the registered Syrian boys and girls are going to public schools in Jordan, the highest numbers between the neighbors of Syria. This is because we don’t want to have a lost Syrian generation as we host them. We want them to be able to go back and build their country and not to fall into any kind of problems. This response plan was 33% founded in 2013 and 2014 by donors; in 2015, this went up to 36%; last year it got up to 61%, because we are doing the right thing and in a unique way. We are also putting pressure on the international community to respond, and they are responding.

Q: The British Ambassador to Jordan said recently that the relationship between both countries is at its best level ever. What is your opinion about this? How do you see it in the future?

INF: The UK-Jordan historical strategic partnership is extremely deep, solid, and it gets better as the years go by. The UK finds, in Jordan, an incredibly reliable partner, in peace, security, stability, sharing the same values, in all the international issues, and the situation. We are always out of the belief in the continuous improvement principle; and we always keep looking at ways to improve this partnership. In all levels, I think this is a very unique partnership.

The UK, for example, hosted the London conference on Syria, Syrian refugees and the host neighboring countries. They took a great leadership role promoting the Jordanian model, and to help us deliver better results, with our great donors in the world, who responded very positively; but there was also a great leadership role performed by the UK in this regard.

We continuously work closely with the UK for all the common strategic priorities that we look after, and we are also looking at strengthening the economic relationships, and, hopefully, getting more benefits out of this very strong relationship.

Q: You were one of the architects of the Aqaba we see today. How do you see Aqaba, moving into the future?

INF: His Majesty always looked at Aqaba and was always hopeful that it could really deliver much more on its potential, than the first successes we had. It was a very simple proposition: it is our only sea access, we only have 27 km and Aqaba needed a strategic plan and a clear vision so that we could transform it. After many studies and much research (I was a involved in all of that) the idea came to transform Aqaba into a special economic zone, to unlock its potential. We put it on a track to become a business destination that focuses on the tourism part as well as a part of the Jordan tourism Golden Triangle (Petra, Wadi Rum and Aqaba); and the logistical capacity of Aqaba, given the fact that it’s the only sea port in Jordan, but it’s a port that plays a very important feeding role to the Levant region (Israel, Palestine, Iraq, Syria and even to a ferry connection of trucks back and forth to West Asia, North Africa and Saudi Arabia).

It required a long-term master plan to accommodate these different activities that would unlock the potential but also can coexist: tourism, logistics, industries and a business destination, especially on the services side. The mega projects are very much unfolding now, the relocation of the port is being successfully completed, the privatisation of the different port terminals has been very successful, and the expansion of the transports to a more logistical value chain is taking place with all the services that come to support the transport gateway into a logistical gateway. Probably the last piece missing as we look to the future is to expand the national railway network; and, hopefully, when the regional stability returns, we will be able to pursue the connection of the railway across the region. This would further deepen the value of Aqaba as an important port that feeds the Levant region, a port that is on the Silk Road, connecting all the way from China to Europe.

What you see today unfolding in Aqaba is a tremendous portfolio of mega projects: real estate, tourism, manufacturing, fertilisers, logistics, and overall services. Uniquely, Aqaba is also going to assume, with the completion of the international tender to launch the Red Sea-Dead Sea project; the first mega desalination project that Jordan embarks on. We are going to build a very big desalination plant in Aqaba, which will start to introduce new desalinated water for the future of Jordan. This is a critical component for our future strategies, to solve the water problems, along with completely recycling water through wastewater treatment plants. We have a very aggressive water strategy, very similar to our energy strategies and with a lot of opportunities for investment as we solve these challenges.

What is unique about the Red-Dead project is that we are actually going to pump it with sea water, about 200 km, into the Dead Sea, to save the Dead Sea (which has been losing 90 cm to 1 m every year). This is very important because it’s going to preserve the Dead Sea environmentally, economically, and it will preserve the tourism as well. It allows Jordan to think about its Aqaba to the Dead Sea Jordan Valley area as a full development zone, which will introduce many more investment opportunities, in such a big water conveyance project. It’s a project that keeps expanding and increasing water delivery to Jordan, as well as sharing it with our neighbors: Israel and Palestine.

Sorry, the comment form is closed at this time.